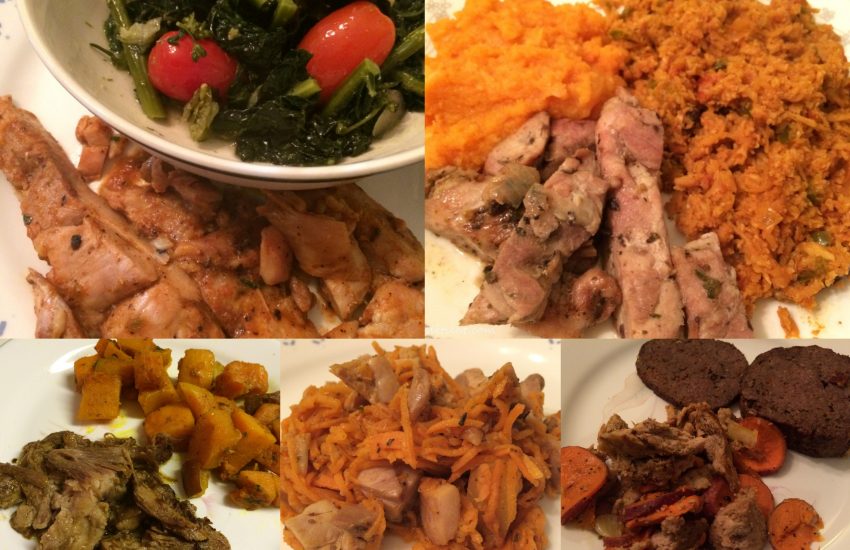 We all love eating healthy and living the paleo lifestyle, but it can be hard!  Sometimes, you just don’t have enough time to prepare all those dishes, and eating paleo out all the time can get pretty freakin’ expensive!  So what are your options?  Well, other than meal planning systems like 20 Dishes, there’s also Paleo Meal Delivery such as Pre-Made Paleo!  So here’s my Pre-Made Paleo review!

So you’re probably wondering what you might get with Pre-Made Paleo, read on!  I’m going to break this in to 2 main parts.  The Experience, the Good, and the Improvement Opportunities.

The meals were delivered in a styrofoam cooler, and each meal was individually packed inside – All Frozen.  The most difficult part about receiving the meals was really finding space in the freezer for it all.  If you were gonna eat it soon though, you could just put it in the normal refrigerator section.

Now, for the next month, every time I didn’t have time to make a meal, I looked in the freezer for a Pre-Made Paleo meal and tried it out.  All you have to do is take it out the freezer and let it thaw in cold water.  If it’s not frozen, obviously skip that step.

To reheat, they give you many options – microwave, stove top, or oven.  I went with stove to – not sure if it’s because I felt like I was cooking myself or what.

Here’s some of stuff I got to try:

Just FYI, Pre Made Paleo sends which entrees to pair with which sides, but obviously you can do what ever you want!  So, I choose to try the Chicken Puttanesca with Root Veggie Mash and Cauliflower Rice.

The Root Veggie Mash was pretty good!  It’s made with Mashed Parsnips and Carrots with Coconut Milk. The Cauliflower Rice was also delicious!  The Chicken Puttanesca (Grilled Chicken with Tomatoes and Olives), I was initially worried about.  Here’s why – chicken that’s too dry is like one of my lease fave things ever.  However, it wasn’t dry at all and was not bad.

Okay, this was probably my fave meal I’ve tried!  That Jerk Pork (Caribbean Style Pulled Pork)  is THE BOMB.  Out of all of the meals I tried – this one is the best.  The ingredients were Pork Butt, Onion, Celery, Carrot, Garlic, Spices, and Salt.  The Butternut Squash was very tasty!

The Chicken Rojas was okay, but that Kale Salad… I was disappointed.  It wasn’t so much the taste, but it was that it was so… so…. wet.  This was the only dish in my package that wasn’t supposed to be reheated.  I defrosted it, and apparently that meant a lot of ice melting in to a watery mess.  The tomatoes were also…. mushy gross.  I almost didn’t want to eat it, but I did… FOR YOU READERS I DID THIS.  Never again.

I think the good is probably obvious.  Healthy Paleo Meals that you don’t have to spend hours preparing!  Also, if you read the part about my experience, you’ll see that most of it was pretty tasty and a treat for my tummy!

While some of the veggies sides were delicious, some were not (ex: kale salad)

I think how to freeze this better so that this doesn’t happen would be great.  The other thing is that I felt like there weren’t enough greens in the whole package.  I’m wondering if this is because greens just do not preserve well or maybe it was just my package?

Breakfast is missing something.

While the Breakfast was pretty tasty… I felt like it was missing something.  Or at least it just didn’t scream breakfast to me.  I thought for a while, and figured it was probably because it lacked eggs and I love me some eggs for my breakfast.  This wasn’t the hugest issue, as I just fried me some eggs, and solved the issues myself.

I enjoyed eating most of the dishes!  While I felt it was missing yummy greens and a good in your face breakfast, I feel like this is a very good option for those of you that want to keep it paleo but just don’t have the time to be preparing and cooking those types of real food meals!