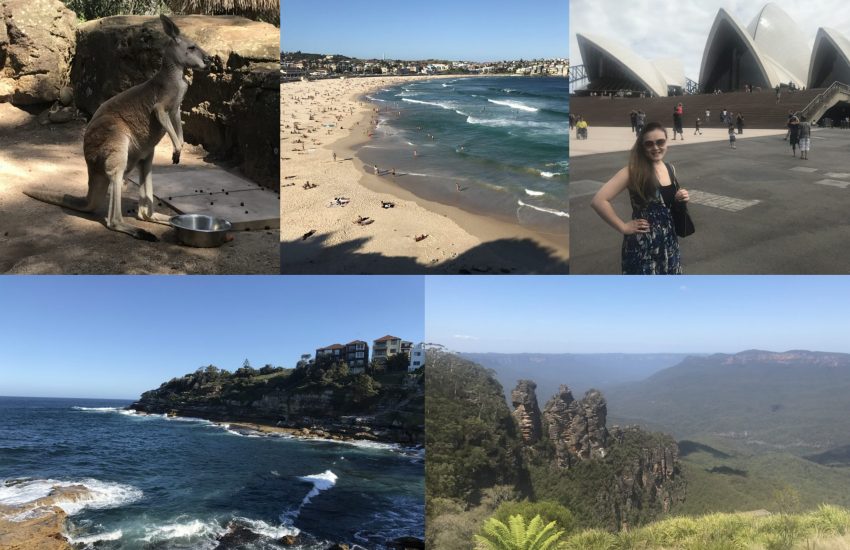 WHAT IS THIS? OMG, it’s a travel blog post!  I haven’t done one of these in a while!  Probably because I haven’t traveled in a while… but LET’S CHANGE THAT.  Most recent vacation… Sydney, Australia!  The 6 day trip was a tad too short, but we managed to do loads…  including these fun things to do in Sydney.

Let me first just say that this is probably by far one of my favorite vacations ever!  Yes, the plane ride was a bit brutal (5 hours from ATL > LAX, 15 hours LAX > SYD), and then there’s the matter of jetlag, and then I did end up getting the flu and bronchitis… but it was still awesome, and I do one day hope to go back!

Things to do in Sydney, Australia:

Most of these are listed in a chronological fashion, which kind of helps if you are planning to go to Sydney too and want to see what to do after what.

The Royal Botanical Garden is a free!  It’s pretty beautiful, DO visit for sure, if you’re there.  The nice thing about it is that you can walk through it, enjoy the view, and then it connects right over to the Opera House!  For some reason, I had this weird obsession with how beautiful the trees were there.  So yeah… TREES!  LOOK AT THEM!  WOOT!

It wouldn’t be a trip to Sydney without checking out the Opera House.  Yes, it’s beautiful, however, it is not as ginormous as I had imagined in my head.   You can go inside (there are tours), you can check out a show, or you can head to Circular Quay and grab a ferry after, which is what we did!

On walking out of the Opera House, you can head towards Circular Quay.  On this route, there are lots of shops and restaurants and the beautiful harbour.  Snap some pix of the Sydney Harbour Bridge!  If you’re brave and not afraid of heights… go for the bridge climb!

I believe there are actually tour ferries, but you don’t even really have to do that if you don’t want to.  Traveling by ferry is just… cool.   And it’s what we did… to go to the next destination which is Taronga Zoo!  It’s a beautiful ferry ride where you get set off and see the bridge and Opera House from new angles.  Side note – transportation is SO EASY there.  Train, Ferry, Buses, Light Rail – everything, you just use the Opal card to get everywhere!  Top it off with some money, and then off you go – tap on… tap off.

Believe it or not, this might be MY FAVORITE PART of the entire trip. Before I went there, I had read somewhere that Taronga Zoo is one of the best zoos ever (said some random person on the interwebs).  At the time I was like, okay, it’s a zoo, whatever.  We’ll see if we go.  Then, we did (mostly cause I wanted to see at least one kangaroo while I was in Australia).  BOY, am I glad we did!!!  There’s so many different types of animals here and surprisingly so many parts of it do they allow the animals and you to just hang out together… with like no fences!


Funny story, I now have a BFF emu.  This emu came up to me… and I was like ‘Quick! Take pictures!’ While this is happening, I have no idea how close it got to me (I thought he was still like at least 1 meter away), and then suddenly… feathers.  I felt a lot of feathers on the back of my right arm.  And then a purr/growl like I’ve never heard before.  Yep.  Emu was right behind me.  It was terrifying, I mean, adorable.

The Rocks is a cool spot for a lunch or dinner location.  I like the little streets behind the main streets.  We found a BBQ your own meat restaurant (Phillip’s Foote) where you order your meats, and you grill them there.  They provide a salad buffet, and of course you can order whatever you want to drink.  While in Australia… so we got a bottle of Shiraz.

This is where we stayed for the trip!  For some reason, the hotel here was cheaper than down town Sydney… maybe it makes sense, but to me I would rather be right by the beach.  Bondi Beach is beautiful and other than just laying out on the beach all day, you can also walk around the restaurants, bars, stores by the beach.  Lots of good food and lots of fun!  Also, have I mentioned… what is the deal with everyone being BEAUTIFUL here?  How is anyone supposed to notice how beautiful I AM when everyone is also??? Totally joking 😀  Btw, there was some topless sunbathing going on, and after I did a quick google, it didn’t seem like it was not legal, but most of those folks hang out on the sides of the beaches so if that’s what you’re avoiding/wanting to do, now you know.

This is actually something I did the last day I was there.  The Bondi to Coogee walk is BEAUTIFUL.  I know, I’ve used this word like 28 times already, but I just… okay, how about MAJESTIC. It was majestic really.  Here are some pictures so you know what I’m talking about:

You don’t have to do the entire walk, as it’s quite far.  We really only made it to one beach over because I was a sick-face with the flu at that point.

This is for you folks that like this historical kind of stuff.  I’m not actually one of these folks, but I did enjoy learning about Sydney and Australia at the Museum of Sydney.  For example the first ships to come to Australia and what they were all about!
Is it silly if I mention that… my favorite part of the museum is on the third floor, there’s a kids room where you can play with sand, and they set up this cool lighting thing that changes color depending on the ‘altitude’ of the sand.  IT IS AWESOME.  Check this out:

No, I’m not running out of things to list.  I legit loved going to the MetCentre Food Court of the mall in Sydney!  It’s nothing like what we have here in the states!  Lots of good authentic Asian foods from Vietnamese Spring Rolls to Sushi to Chinese Noodle Soup (from Noodle Story) and more!  We didn’t even intend to eat there, but once we saw it, we were like allright, let’s eat this stuff Tapas style and ate a bunch of food.

Scenery folks, this one is for you!  You can take the train about 2 hours and arrive at Katoomba.  At Katoomba, you can take a bus that takes you straight to Echo Point.  There you will see… the Beautiful, I mean, Majestic, I mean, Awesome Blue Mountains.
Three Sisters is the most popular part of Blue Mountains, and you can take a hike over to one of the Sisters.  The stairs down to it/up it is kind of scary – but worth it!

Head over to Scenic World to ride some skylifts (skyway) and the STEEPEST railway in the world.  The skylift has these floorboards in the middle that turn from opaque to clear so you can look down at all the trees and freak yourself out.  To me, it all looked like broccoli.


The steepest railway will take you down to the rain forest and you can also learn some stuff about miners back in the day.

Coming back from Blue Mountains, we stopped by Chinatown for dinner.  This is really awesome for the foodies out there, as there’s so many yummy and authentic food choices!  We choose a Chinese restaurant called Little Hunan as we are big fans of spicy foods.  We got exactly what we wanted, Claypot Cauliflower and Bandit Duck:

So that’s a sum of what we did there, and if you’re thinking about visiting Sydney, Australia any time soon, hopefully it is helpful in some way!  I would definitely love to go back to Australia again – maybe Melbourne next time!

You liked that didn't you? Here's more where that came from:
Things to Do and Eat in Puerto Rico!
Sharing is caring!