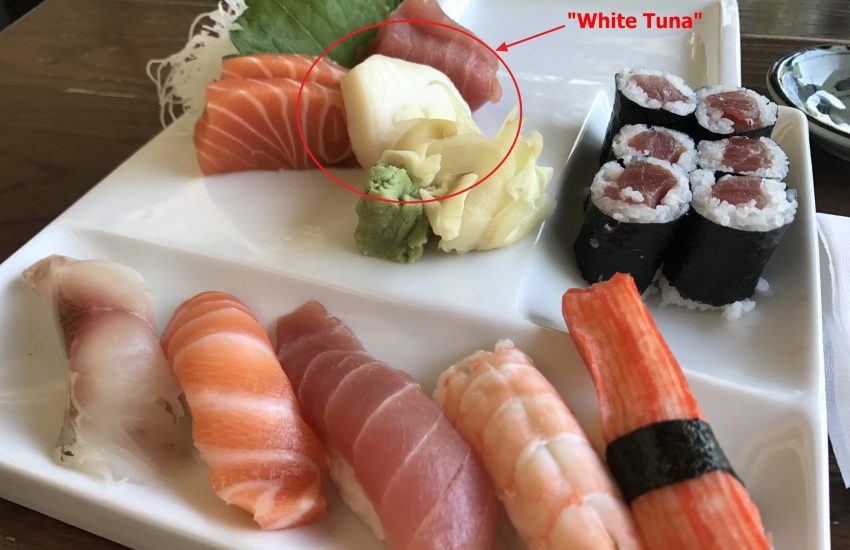 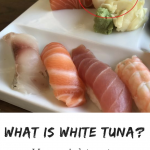 It’s not a secret that I love sushi and sashimi.  Sometimes I legit crave it, and need it ASAP.  There’s a sushi restaurant nearby that has pretty good food (not just sushi and sashimi, but good bento, ramen, and other Japanese dishes too).  At some point, I discovered this perfectly sized Sushi and Sashimi combination, and this has been my go to when I’m craving some sushi or sashimi.

The arrangement is quite delicious.  There’s 5 nigiri, 5 sashimi, and there is also a tuna sushi roll.  Now, everything is usually delicious and fresh, but there is one sashimi piece that tasted extra fat and buttery that I couldn’t identify.  I proceed to ask the waiter what this piece of fish is.  The response?

If you’re very knowledgeable about fish or seafood, then you’re probably rolling your eyes right now… because you’re right – there is no such thing.  Let me say it again.  White Tuna is not a thing.

Well, let’s back up for a second.  It’s a nick name… sometimes, it can (and you hope it’s this) refer to albacore/longfin tuna.  But most of the time… it’s actually a fish called Escolar and this is the one you might have to worry about.

What is Escolar?  Escolar, aka snake mackerel or waloo, is a dark fast swimming fish that can not metabolize wax esters found in its diet.  Hence, escolars have a very high oil content. In fact, it’s chinese name is ‘油魚’ which literally translates to 油 = Oil 魚 = Fish.

What does this all mean?

This means it may be super tasty to many.  But unfortunately, it also means that it can cause something called keriorrhea.  Don’t click on that if you’re eating.  Actually, don’t read this next sentence if you’re eating:  It’s basically greasy, orange colored diarrhea…

WHAT!?  WHY WOULD PEOPLE EVEN SELL IT.

Well, I guess because it’s delicious?  I don’t really know.  But since you can get upset stomach and diarrhea from it, it i recommended that you limit your escolar portions to 6 ounces or less.

Oh, and Fun fact:  Escolar has been banned in Italy and Japan.

Isn’t that fun that so many sushi restaurants here in the States sell it and are allowed to call it “White Tuna” instead?  I find that fun too.  Oh wait.  I don’t.

Still have an appetite?

For some seafood you can enjoy without suffering keriorrhea… try these yummy recipes (if you still have an appetite):

You liked that didn't you? Here's more where that came from:
A Cookbook Review: The Paleo Foodie
Recommended Diet Tracking Tools and What They Do
What to do with Egg Yolks?
How To Eat Paleo On A Budget
Sharing is caring!