This Sunday, I ventured to downtown Atlanta to try out the Paleo restaurant: Urban pL8 for brunch.  It is a bit tucked away so that if you hadn’t already heard of the place, you might not ever stumble in.  However, when we got there it was 100% packed.  I think that really says something about the restaurant! 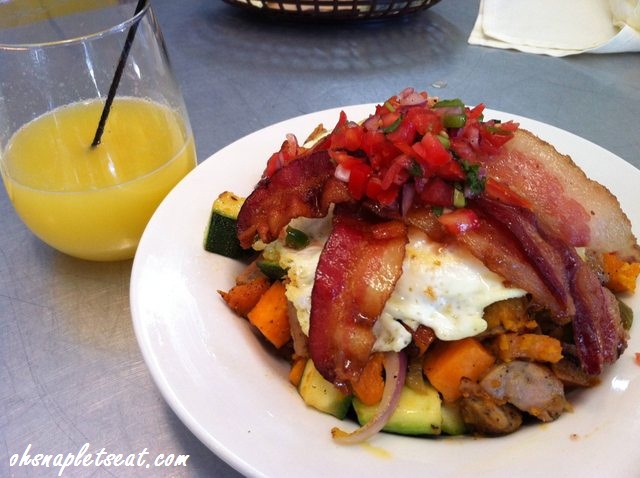 The brunch menu consisted of a mix of both paleo dishes (such as paleo breakfast hash, paleo frittata) and non-paleo dishes (such as crabcake and eggs and organic buttermilk oatmeal pancakes).  Even the non-paleo dishes seemed very healthy, which I really liked. They also had cocktails and beers!  It’s okay to mix it up once in a while!  Unfortunately, I arrived a little too late and so there was no point in participating in their bottomless mimosas (for $15) but I did order one just to try it out since plenty of people seemed to be enjoying their mimosas.
I ended up ordering the Paleo Breakfast Hash (pictured above), which consisted of:

Sounds like a lot of stuff?  Well, it was!  I couldn’t even finish mine! It was DELICIOUS!  I don’t know about you, but I LOVE the sweet and savory taste in my food – and this was the perfect amount of both!  The sweet potatoes were sweet, and then there’s some jalapenos, then another bite of bacon happens!  I highly recommend trying this place out if you’re in Atlanta!
Update:  Tried it a few more times at the new location – still amazing.  Just served in a different container now: 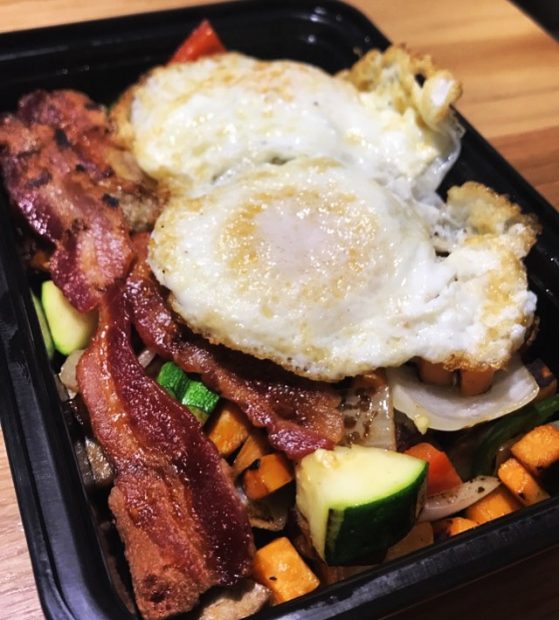 How to Eat Out and Stay Paleo | Oh Snap! Let's Eat!