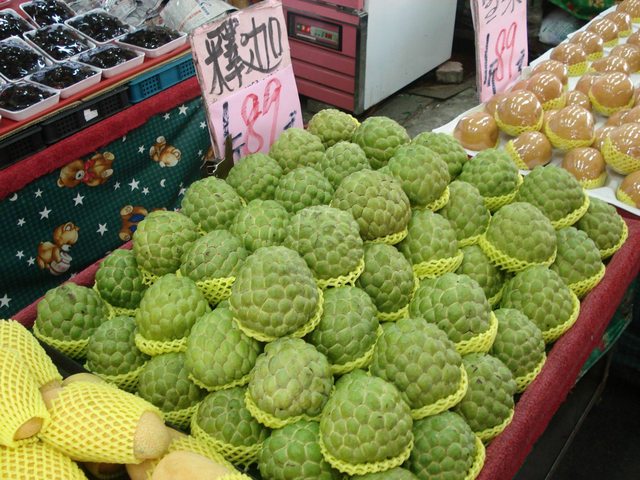 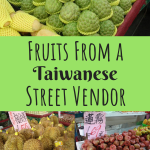 Being in the subtropical zone, Taiwan is in a great location for growing all sorts of delicious fruit, and is also pretty well known for the fruit produced.  Not only is there an abundant amount of fruit, but they are also all delicious! These are the Taiwanese Fruits from a Taiwanese Street Vendor I saw while I visited.

Let’s take a look at what types of fruits is typical to see at a Taiwanese Street Market:

You can find these babies here in the states, but not as commonly as in Taiwan.  These yellow-interior watermelons are in any of the grocery stores in Taiwan.  They taste just like the red version, but looks unique, and for some reason I feel fancier eating them…

Guavas can also be found here, but the ones I’ve seen are NOT as beautiful as the ones I find in Taiwan. Not even close.  Those here are all tiny, and when I tried buying some once, they were not nearly as sweet as those from Taiwan.  Taiwanese Guavas are big, round, juicy, and delicious!

First of all, look how cool they look!  Can you see why they are called “Starfruit”?

The taste, if I HAD to describe it using the taste of other fruits… is a little bit citrus-y and apples and plums? If they are super ripe, they are super sweet, if not so ripe, they taste a bit more sour.  Well, that’s the best I can do with describing the flavor.

The papayas found in Taiwan have the same story as guavas.  Yes, you can find them here in the states, but they are not nearly as ginormous or sweet/yummy.  Also, they are a lot more commonly eaten here (just like the guavas).

I haven’t seen these in the States before, so I believe if you can, it is very rare to find… These babies are called Wax Apples… or apparently any of the following names: Champoo, love apple, java apple, royal apple, bellfruit, Jamaican apple, water apple, mountain apple, cloud apple, wax jambu, rose apple, and bell fruit.
Don’t be mistakened by the name, it doesn’t tastes or feel like apple at all.  I think the only reason it is called that is because it’s red…and is a fruit. They are way softer than apples, and not as sweet/crunchy.  I do love these a lot, and just realized I didn’t have any this trip back to Taiwan! 🙁

These fruits can be BIG (as wiki puts it: 30 centimetres (12 in) long and 15 centimetres (6 in) in diameter, and it typically weighs one to three kilograms (2 to 7 lb)), but that’s not the most recognizable trait of Durians.  That…would actually be the distinct SMELL of the fruit. Some people like the smell, some people HATE it with a passion.  I agree with both somehow, but I definitely think it tastes kind of… yummy. You see, if you don’t know what you’re expecting, it’s custard-like texture might be a surprise.

Here it is being split up and making some people cringe and some people get hungry with its smell:

Yep, just your average coconuts.  But look how nice they look! I just love that it’s so easy to find yummy fruit everywhere in Taiwan 🙂

If you only clicked on this post because of that first pic, you’ve scrolled down far enough to learn about them!  These are sugar-apples.  Again, they don’t taste at all like apples despite its name.  I definitely have never see these in the states, but again, super common in Taiwan.  They are custard-like inside, but unlike the Durian, no one thinks it smells bad, and most people think it tastes yummy!

Looking for more posts about my travel in Taiwan? There’s plenty here!