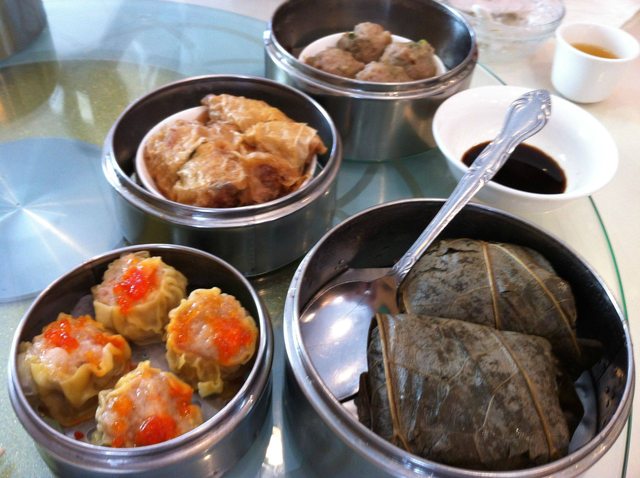 If you’re 100% on a strict paleo diet, eating out will be difficult. That’s why most people are not on the 100% strict paleo diet. Personally, I recommend being on the 80/20 paleo diet. 1 – It’s much easier to stick to, 2 – You still get to enjoy some things such as beer! 3 – You don’t have to be that annoying friend on the paleo diet that never hangs out with your friends because they like to eat out.

However, when you are eating out, you can still try to eat as healthy as possible and not undo all the good you’ve been doing. So what should you do when you eat out to do less damage? Well, here’s my take on it:

(The following is a brief summary of eating paleo at a Mexican restaurant, for something more thorough, such as what to order – check out my post on Eating Paleo at Mexican Restaurant here.)

I know what you’re thinking. Rice… and beans! That doesn’t seem paleo at all! Well, true, but everything else isn’t too bad! Let’s take for example if you go to a fast food Mexican restaurant… such as Chipotle or Qdoba. I recommend getting something like the Burrito Bowl/Naked Burrito. Every time I visit – I order this, skip the rice, and order meat, lettuce, cilantro, salsa, lots and lots of guacamole! As any paleo eater knows, guacamole is super filling – so I don’t even need the rice! Occasionally, I even order beans… and if you’re going to do this, stick with black beans.

Let’s take a look at if you’re at a non-fast food Mexican Restaurant. This is great – start out with some guacamole, and then I would either order a Fajita and eat it without the rice/beans/tortillas, or you can order any of those meat (slow roasted pork and other yummy things) dishes and just skip the harmful things!

(The following is a brief summary of eating paleo at a Chinese restaurant, for something more thorough, such as what to order – check out my post on Eating Paleo at Chinese Restaurant here.)

It’s pretty obvious what I am about to say: Skip the rice. But obviously you don’t have to. Do what you want, I’m not the boss of you. To be honest sometimes I have a little! But at Asian restaurants, what you want to do is order un-fried meat and veggies… and those that don’t have a ton of sugary sauce all over it (looking at you guys that love sweet and sour sauce!). At Chinese restaurants, I suggest something like Kung Pao Chicken (without the peanuts, or with it but just don’t eat it), Mushroom Chicken, Mongolian Beef, you get the idea. Also – very important… ask them to not add any MSG. Many Asian restaurants (and American ones) put a load of that stuff in their food, and it’s horrible for you!

This isn’t super hard either. Skip the bread, first of all. Most meats you order is going to be a big slab of greatness (I mostly say this because I love meat) but a lot of places tend to make the meat – let’s say a grilled chicken breasts….. and then add a pound of creamy sauce or something unhealthy all over it. Either ask for NO sauce, or ask for it on the side so that if you do change your mind to indulge… you have a chance.

Side items are pretty easy to handle as you can usually choose mixed vegetables or something, and if your entree actually comes with fries, you usually CAN ask to change it. Salads are another good choice too, and for dressing, the most healthy would be something like balsamic vinaigrette. Golden rule with salads? Ask for the dressing on the side. It is a well known situation that American restaurants tend to put way more dressing on the salad than you and your taste buds actually need.

Other than these, there’s some other tips paleo-eaters have tried such as:

You liked that didn't you? Here's more where that came from:
A Cookbook Review: Well Fed 2
Healthiest Veggies You Should Eat More
Paleo vs. Vegan: Which Should You Choose?
Five Easy, Healthy, and Paleo Snacks
Sharing is caring!